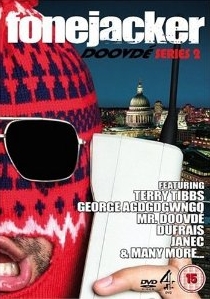 Calling all couch potatoes, students and unsuspecting shopkeepers -- Fonejacker is back on the loose wreaking havoc with his trusty 80s mobile in Series 2, available to own on DVD from 27th October 2008, with the Series 1-2 boxset released on the same day through 4DVD.

Taking the art of the prank call to a whole new level, Fonejacker is at the forefront of brash, cutting edge comedy with a cult following to match. Spending his time winding up innocent folk with hoaxes which often border on the surreal and ridiculous, the DVD features a raft of unseen extras such as the Fonejacker Christmas Special, commentaries, unseen footage, out-takes and behind the scenes documentary and The Fonejacker Doovdé signing at Virgin Piccadilly.

Under the guise of many different aliases -- Terry Tibbs a dodgy car salesman who's always trying to get a bargain; Mr Doovdé who talks in bewildering abbreviations; George Agbgdgwngo, an amiable chap who'll try all sorts of ludicrous scams to obtain your bank account details; The Mouse, a talented mouse who can do lots of things, including talking; and Mr Miggins, a confused elderly gentleman who can't get to grips with the world of modern technology.

Originally shown as part of Channel 4's Comedy Lab Season in 2006, this was followed with Fonejacker's alternative Christmas message on E4 before kicking off the 6 x 30 minute episode series on the channel in July 2007. Available to buy from 27th October, fans will have the chance to own the second prank-filled series of Fonejacker which follows its September E4 premiere, as well as the critically-acclaimed first series with the boxset released by 4DVD on the same day.