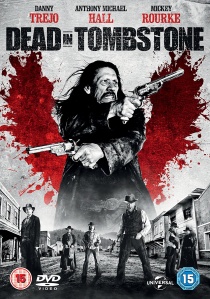 A ruthless outlaw returns from beyond the grave to avenge his own murder in Dead in Tombstone, released on DVD and Blu-ray on 21st October 2013, courtesy of Universal Pictures UK.

Straddling the thin line between life and death, Dead in Tombstone is a fiery tale of greed, revenge and atonement set in a Gold Rush boomtown populated by thugs, drunks and unlikely heroes. DVD Originals veteran Roel Reine (The Marine 2, Death Race 2, Scorpion King 3) directs from a script by Shane Kuhn and Brandon Cowles (Scorpion King 3).

Danny Trejo (Machete), Anthony Michael Hall (The Dark Knight) and Oscar nominee Mickey Rourke (The Wrestler) star in this fiery, action-packed battle for vengeance. As a ruthless gang overruns a small mining town, they murder their own leader, Guerrero Hernandez (Trejo), in a cold-blooded power grab. Sentenced to eternity in hell, Guerrero finds himself confronted by Satan himself (Rourke), offering a daring proposition: deliver the six souls of his former gang and he will escape damnation. With time running out, he sets out on a brutal rampage to avenge his own death.

UHD
Almost four decades after he drew first blood, Sylvester Stallone is back as John Rambo in a deadly journey of vengeance as Rambo: Last Blood is released on DVD, Blu-ray and 4K UHD 13th January 2020 ... END_OF_DOCUMENT_TOKEN_TO_BE_REPLACED
Hot PicksView