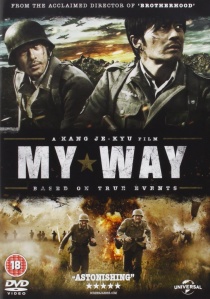 Prepare for a truly epic and historical journey charting sporting success through to the World War II battlefields of Asia and Europe when My Way is released on Blu-ray, DVD and Digital Download on 24th September 2012 from Universal Pictures (UK).

My Way marks the return of South Korean director Kang Je-Kyu, seven years after his critically acclaimed Brotherhood (Tae Guk Gi). Starring two of Asia's biggest stars, Jang Dong-gun (Brotherhood) and Japanese actor Jô Odagiri (The Warrior and the Wolf), this fact-based story is South Korea's biggest ever budgeted film and is packed with high-octane action and heartbreaking emotion, leaving you transfixed from start to finish.

My Way is the story of two men, Jun-Shik (Jang Dong-gun) and Tatsuo (Jô Odagiri); one Korean, the other Japanese, who are bitter rivals and enemies both striving for the same Olympic gold medal. When war breaks out both men must fight for the Imperial Army, but their unit is brutally shattered and they become prisoners. For each man this is the start of an adventure spanning years of savage fighting in China, the Soviet Union and finally, Europe, where they are reunited on the eve of D-Day on the beaches of Normandy.

As they survive endless, unpredictable battles, they gradually transform into each other's greatest hope. Now bonded by blood these unlikely survivors must make a momentous choice: fight again or find a way home...

Related Articles
Bright Future
The Tower, My Wife Is A Gangster
The Man From Nowhere
Typhoon
Comments
Hot Pick