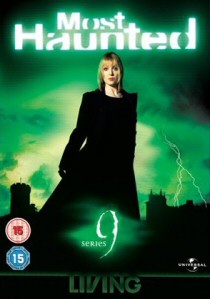 Renowned ghost hunters Yvette Fielding and Karl Beattie are joined by their fearless team of ghost busters including psychic David Wells and paranormal investigator Ciaran O'Keefe investigating the most spooky phenomena yet in Most Haunted Series 9 set for DVD release by Universal Pictures on 28th April 2008. The DVD release of Living's most successful paranormal TV series ever comes in a 5 disc DVD Boxset and features 15 uncut episodes with more than 16 hours of footage including a spectre of Behind the Scenes supernatural extras.

Set against a background of strict parapsychology guidelines and extensive historical research, you can follow the team if you dare on their ghostly travels investigating the paranormal, from the chilling poltergeist activity at Alton Towers - have you seen the spectral lady in black? Or felt a cold chill on the Hex ride? To investigating orbs actually caught on camera at Stockport Workhouse- will Yvette uncover any ghostly phenomena in the old hospital? Even Carol Thatcher helps Yvette Fielding and the team investigates ghostly phenomena in Tatton Old Hall, a 15th century farmhouse where a mischievous presence has been reported!

For the first time ever Yvette takes her team including Psychic David Wells and paranormal investigator Ciarán O'Keeffe abroad to eerie Transylvania in an attempt to contact 'Vlad the Impaler'- thought to be the inspiration behind Dracula.... The team investigates paranormal activity in a medieval well even uncovering human remains. Will Karl ever be the same after being trapped with an unknown skeleton?

HotDVDBDTV
DCI Tom Brannick returns, as the murder of a crooked accountant unravels a trail of greed that threatens to expose the true identity of the legendary assassin, codenamed, Goliath in Bloodlands: Series 2 released on DVD and Blu-ray 14th November 2022 from Dazzler Media. END_OF_DOCUMENT_TOKEN_TO_BE_REPLACED
Top PicksView