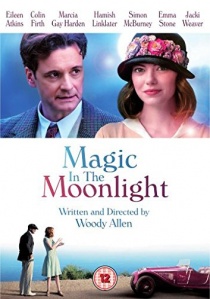 Chinese conjuror Wei Ling Soo is the most celebrated magician of his age, but few know that he is the stage persona of Stanley Crawford (Firth), a grouchy and arrogant Englishman with a sky-high opinion of himself and an aversion to phony spiritualists' claims that they can perform real magic. Persuaded by his life-long friend, Howard Burkan (McBurnley), Stanley goes on a mission to the Côte d'Azur mansion of the Catledge family: mother Grace (Weaver), son Brice (Linklater), and daughter Caroline (Leerhsen).

He presents himself as a businessman named Stanley Taplinger in order to debunk the alluring young clairvoyant Sophie Baker (Stone) who is staying there with her mother, Mrs Baker (Harden). Sophie arrived at the Catledge villa at the invitation of Grace, who is convinced that Sophie can help her contact her late husband, and once there, attracted the attention of Brice, who has fallen for her head over heels. From his very first meeting with Sophie, Stanley dismisses her as an insignificant pip-squeak who he can unmask in no time, scoffing at the family's gullibility. To his great surprise and discomfort, however, Sophie accomplishes numerous feats of mind-reading and other supernatural deeds that defy all rational explanation, leaving him dumbfounded.

Before long, Stanley confesses to his beloved Aunt Vanessa (Atkins) that he has begun to wonder whether Sophie's powers could actually be real. If they were to be true, Stanley realises that anything might be possible, even good, and his entire belief system would come crashing down. What follows is a series of events that are magical in every sense of the word and send the characters reeling. In the end, the biggest trick this film plays is the one that fools us all.

Don't miss the unforgettable story of true magic, as Magic in the Moonlight is yours to own on Blu-ray and DVD on 9th February 2015 courtesy of Warner Home Video.

3D-BD
Following the global success of Godzilla and Kong: Skull Island comes the next chapter in the cinematic Monsterverse in Godzilla II: King of the Monsters, arriving on DVD, Blu-ray and 4K UHD 7th ... END_OF_DOCUMENT_TOKEN_TO_BE_REPLACED
Hot PicksView