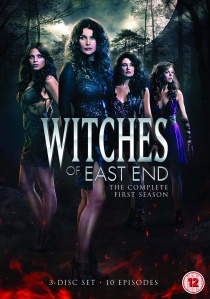 Prepare to fall under the spell of the Witches of East End when the complete first season arrives on DVD this Halloween, courtesy of Twentieth Century Fox Home Entertainment.

Based on the best-selling books of the same name by Melissa de la Cruz, Witches of East End tells the story of small-town art teacher Joanna (Julia Ormond; Mad Men, Legends of the fall), her two daughters Freya Beauchamp (Jenna Dewan-Tatum; American Horror Story: Asylum, Step Up), and Ingrid Beauchamp (Rachel Boston; 500 Days of Summer, Ghosts of Girlfriends Past) and Joanna's sister Wendy (Mädchen Amick; Twin Peaks, Star Trek: The Next Generation) who arrives to warn her that her tarot cards have prophesised her untimely death.

The Beauchamps lead quiet, seemingly un-enchanted lives in the secluded seaside town of East End. When Freya becomes engaged to a wealthy newcomer, a series of unexplained events force Joanna to reveal to her daughters that they have been born into the next generation of powerful and immortal witches. With the help of their mother and Aunt, the girls must learn how to cultivate their craft and work together to defeat unearthly enemies seeking revenge on their family, while keeping their abilities a secret from the town.

From the producers of Homeland, Eastwick and Heroes, this spell-binding supernatural drama will leave you bewitched as Witches of East End flies on to DVD on 27th October 2014.

DVD
Released on DVD and Blu-ray 27th July 2020 from Dazzler Media, created by visionary award-winning filmmaker of The Raid, Gangs of London takes audiences on an immersive journey into the hidden heart ... END_OF_DOCUMENT_TOKEN_TO_BE_REPLACED
Hot PicksView