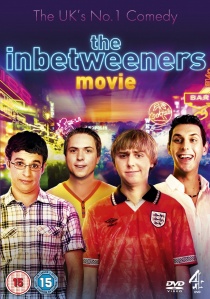 The hit film of the summer, The Inbetweeners Movie, will burst into living rooms across the nation this winter when the DVD & Triple Play (containing Blu-ray, DVD & Digital Copy) are made available for the first time on 12th December 2011 from 4DVD.

The releases contains over 2 hours of previously unseen material including a feature length 'Making Of' following the cast as they filmed in London, Malia and Magaluf; hilarious additional scenes which see Mr Gilbert on a stag do and Jay getting his first tattoo; behind-the-scenes videos from the boys on set; and laugh-out-loud, never-before-seen bloopers alongside a host of other exclusives. The Triple Play also includes an exclusive, 18-certificate full-length Extended Cut of the film, with commentaries from writers Damon Beesley and Iain Morris and from the four male leads.

Bringing the Inbetweeners back together in their first feature film, The Inbetweeners Movie sees Will (Simon Bird), Simon (Joe Thomas), Jay (James Buckley) and Neil (Blake Harrison) finish school forever and embark on their first lads' holiday. Setting off for two weeks in Malia with no parents and no teachers, the boys have impossibly high hopes for the "clunge-fest" they are eagerly anticipating.

From holiday accommodation resembling a soviet prison block, to Jay falling asleep, face-first, in an ants nest and Simon's run-ins with love rival and island bully; this is one holiday to remember... Or quickly forget. Everything changes when the boys meet four girls looking for their own perfect post-school holiday. With pulling techniques seemingly modelled on a desire to repel female attention, the lads manage to couple up; cop off and pass out - in no particular order. The ultimate coming-of-age film, where four boys become men... or at least try to, The Inbetweeners Movie will have you laughing until you cry and reminiscing about your own teenage years.

The film welcomes back regular stars of the television series such as Emily Head as Carli, Belinda Stewart-Wilson as Will's Mum and Greg Davies as headmaster from hell, Mr Gilbert. We are also introduced to some new faces including Lydia Rose Bewley as Jane, Laura Haddock as Alison, Jessica Knappett as Lisa and Tamla Kari as Lucy.

A British comedy phenomenon, The Inbetweeners Movie broke records both sides of the Atlantic, taking over £20million box office sales in its opening weekend. With the current box office pushing the £45million mark, this DVD release is surely a must-have for the Christmas period.

DVD
The end of the line is only the beginning in a wild, non-stop thrill ride through modern-day Japan as Bullet Train is released on DVD, Blu-ray and 4K UHD 24th October 2022 from Sony Pictures Home Entertainment END_OF_DOCUMENT_TOKEN_TO_BE_REPLACED
Top PicksView