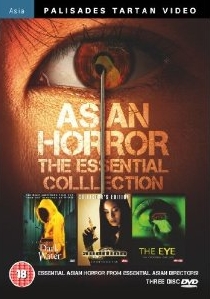 News
News Article Go back to homepage
Palisades Tartan brings together three of Asia's most acclaimed horror movies in a DVD triple bill released on 26th October 2009.
Unknown
Unknown
26/10/2009
Thank you for supporting DVD365.net when you order using the link(s) below. As an Amazon Associate we earn from qualifying purchases
Buy DVD
Information

Palisades Tartan brings together three of Asia's most acclaimed horror movies in a DVD triple bill that perfectly illustrates why Hollywood has been so keen to remake and rip-off these truly original classics of Asian cinema. This incredible three-disc collection includes Takashi Miike's Audition, 'Ring' director Hideo Nakata's Dark Water and The Pang Brothers' The Eye and is released on 26th October 2009.

Directed by cult auteur Takashi Miike (Ichi The Killer; Visitor Q) and starring Ryo Ishibashi (The Grudge) and Eihi Shiina (Tokyo Gore Police), the notorious shocker Audition begins with a lonely widower sitting in on auditions for a non-existent movie project primarily set up to help him find a new wife. Entranced by one particular candidate, a former ballerina, he takes her phone number and eventually invites her to dinner. But this soft-spoken beauty isn't quite what she seems and soon the whispers of romance are replaced by screams of terror.

Forget the Hollywood remake, director Hideo Nakata's welcome return to the horror genre (in which he made his name with the 'Ring' movies) is the real deal. A sinister and edgy ghost story about a mother and daughter whose rundown apartment has unexplained damp patches on the walls and ghostly apparitions from a young girl, Dark Water does for bathtubs what his previous two hits did for video players.

Pan-asian auteurs Danny and Oxide Pang (Bangkok Dangerous) bring their famed editing skills to bear on the horror genre in The Eye, a tense and creepy tale that focuses on Mun, a cornea-transplant recipient who has been blind most of her life. Adjusting to her new-found sight, Mun begins to see haunting and disturbing images of dead people. As the visions increase in frequency, she turns to a young psychiatrist for help in discovering the identity of the deceased donor responsible for her restored sight.