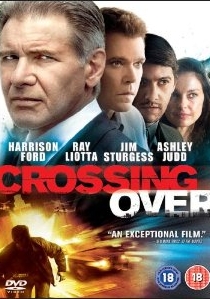 News
News Article Go back to homepage
With a multi-strand drama about immigration in America, South African writer-director Wayne Kramer's Crossing Over is released by Entertainment in Video on DVD and Blu-ray on 23rd November 2009.
Unknown
Unknown
23/11/2009
Thank you for supporting DVD365.net when you order using the link(s) below. As an Amazon Associate we earn from qualifying purchases
Buy DVD
Buy BD
Information

South African writer-director Wayne Kramer made a bold feature film debut in 2003 with the critically-acclaimed casino drama The Cooler. He has now brought his key behind-the-camera collaborators from that project back together again to film Crossing Over, released by Entertainment in Video on rental and retail DVD and Blu-ray on 23rd November 2009, and a hugely impressive multi-strand drama about immigration in America.

With a cast headed by Harrison Ford (Star Wars; Indiana Jones; Patriot Games), Ray Liotta (Goodfellas; Blow), Ashley Judd (Kiss The Girl; Heat) and Cliff Curtis (Whale Rider; Die Hard 4; 10,000 BC) The US offers hope for the thousands of immigrants fleeing their home countries in search of a better life but that often comes at a price. Many can earn citizenship legally through a lengthy bureaucratic process but others find themselves out of luck in a country where virtually anything can be bought.

For these people, sex, violence and betrayal become their currency. Some wait in line for permission to enter the U.S. but others take matters into their own hands.

Every would-be immigrant has a different struggle: the single mother deported without her child, a High School girl whose provocative essay draws FBI attention, an Australian actress who willingly prostitutes herself to earn her Green Card, a struggling British musician trying to build a career while working at his day job and a Korean teenager caught between two worlds.

Working for Immigration and Customs Enforcement (ICE) in the cultural melting-pot that is Los Angeles, Max Brogan (Harrison Ford) is an agent sworn to enforce US immigration laws and his sense of duty and compassion mirror the current immigration challenges the U.S. faces today.

Through the lives of Brogan, his ICE partner Hamid Baraheri (Cliff Curtis), immigration attorney Denise Frankel (Ashley Judd) and her husband, applications adjudicator Cole Frankel (Ray Liotta), we see how the impact of immigration goes far beyond the job they do and eventually starts to take control of their lives.

Brogan's struggle is the nightmare the US faces today with his sense of duty and compassion mirroring the current immigration challenges. Ultimately, in Crossing Over we learn that the only thing greater than what divides us is the dreams that we share.