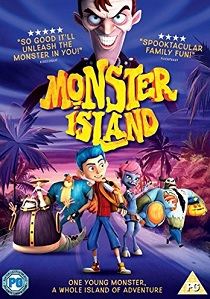 In treat that fans of Monsters Inc and Despicable Me will adore, a young boy discovers he's not entirely human and heads to Monster Island to discover his true identity, in this animated family adventure released 16th October 2017 from Kaleidoscope Home Entertainment.

When young Lucas finds out he's not really a human; the news changes his whole world. Especially since his first monster transformation happened in front of the most popular kids at school! After unreasonably blaming his dad for keeping his identity a secret, the angry and embarrassed Lucas runs away from home.

His search for Monster Island and his real roots takes him on a fabulously scary journey that puts him face-to-face with more tentacles, fangs and far-out situations than he can shake one of his new wings at. Ultimately Lucas learns that being a freak, isn't freaky - it means you're a member of a brand new type of family, you can proudly call your own.

Monster Island, the fantastic animated feature from the producer of Top Cat Begins, and the writer of box office hits Madagascar and The Jungle Book, featuring voice talent from Despicable Me and Khumba: A Zebra's Tale, hits DVD this October, and it's and one to watch over and over again.

The debut feature from the award-winning animator Leopoldo Aguilar, Monster Island is what every family film should be - laugh out loud funny, thrilling, and occasionally a tiny bit frightening. Packed with witty one- liners, marvellously memorable characters, all manner of extraordinary beasties (including the strangest police duo you've ever seen), and an extremely hissable villain, this is monstrously enjoyable for kids and adults alike.

Strikingly designed and bursting with colour and imagination, fans of Monsters Inc, Despicable Me and The Incredibles won't want to miss this: so grab the DVD and settle back on the sofa for the trip of the summer: to Monster Island! You and all your family will love every minute!