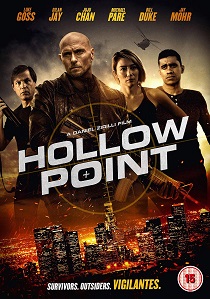 NewsActionLuke Goss
News Article Go back to homepage
In Hollow Point, released on DVD 8th July 2019 from Spirit Entertainment, a grieving man finds himself caught up in a war between a group of charismatic vigilantes and the crime that infests their city.
Luke Goss, Dilan Jay, Juju Chan, Michael Pare, Jay Mohr, Bill Duke
Daniel Zirilli
Dilan Jay, Adel Nur
Spirit Entertainment
1 hour 30 minutes
08/07/2019
#HollowPoint
Thank you for supporting DVD365.net when you order using the link(s) below. As an Amazon Associate we earn from qualifying purchases
Buy DVD
Information

After his wife and daughter are killed in the crossfire of a botched crime, a college professor bands forces with a vigilante lawyer and a team of underground avengers to wage a war against the criminals infesting their city.