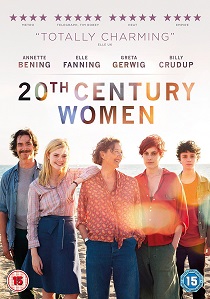 Set in 1979 Santa Barbara, 20th Century Women follows Dorothea (Bening), a determined single mother in her mid-50s who is raising her adolescent son, Jamie (Zumann), at a time brimming with cultural change. When Dorothea enlists the help of two younger women - Abbie (Gerwig), a punk artist boarding in Fields's home; and Julie (Elle Fanning), savvy teenage neighbor. Along with William (Crudup), a bohemian handyman who rooms in Dorothea's house, they form a makeshift family forms that inspires them for the rest of their lives.

DVD
The end of the line is only the beginning in a wild, non-stop thrill ride through modern-day Japan as Bullet Train is released on DVD, Blu-ray and 4K UHD 24th October 2022 from Sony Pictures Home Entertainment END_OF_DOCUMENT_TOKEN_TO_BE_REPLACED
Top PicksView