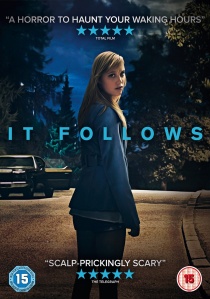 After her dream date goes badly wrong, 19-year-old Jay discovers that a mysterious curse has been passed on to her. She begins to experience terrifying visions and the feeling that she is being followed wherever she goes. Only she seems able to see these deadly pursuers, who walk slowly towards her with only one purpose - to kill.

Jay is in a race against time and must prove to her friends that she is in deadly terror and convince them to help her combat the seemingly unstoppable 'It' before it gets her.

David Robert Mitchell takes ingredients from classic horror films from the past - including Halloween, Invasion of the Body Snatchers and Rosemary's Baby - and comes up with a classic all of his own, a frightening urban legend in a suburban setting that is wickedly simple and incredibly effective.

A genuinely scary thrill ride that will stay with you for days afterwards, featuring a stunning break-out performance from Maika Monroe, It Follows, released on DVD and Blu-ray by Icon Home Entertainment on 29th June 2015, is a benchmark horror classic for a new generation of fright fans.

UHD
With all the heart and humour audiences expect from Walt Disney Animation Studios, Big Hero 6, released on 4K UHD for the first time 30th August 2021 and exclusive to Zavvi, introduces you to a ... END_OF_DOCUMENT_TOKEN_TO_BE_REPLACED
Top PicksView