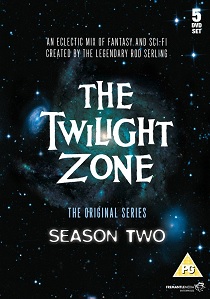 NewsTV SeriesScience FictionDrama
News Article Go back to homepage
One of the most iconic and celebrated TV shows of all time, The Twilight Zone is now being made available on DVD and, for the first time ever in the UK, on Blu-ray by Shock Entertainment and FremantleMedia Enterprises on 20th June 2011. Over the course of 2011, all five complete seasons of the series plus the complete 1980s revival series will be released.
Jack Klugman, James Turley, Vaughn Taylor, Jay Overholts, Robert McCord, Rod Serling
Lamont Johnson, Buzz Kulik, Douglas Heyes, John Brahm
William Froug, Del Reisman, Rod Serling, Buck Houghton
FremantleMedia Enterprises
Unknown
20/06/2011
Thank you for supporting DVD365.net when you order using the link(s) below. As an Amazon Associate we earn from qualifying purchases
Buy DVD
Buy BD
Information

One of the most iconic and celebrated TV shows of all time, The Twilight Zone is now being made available on DVD and, for the first time ever in the UK, on Blu-ray on 20th June 2011. Over the course of 2011, Shock Entertainment and FremantleMedia Enterprises will be releasing all five complete seasons of the series (originally broadcast between 1959 and 1964) plus the complete 1980s revival series.

Shortly following the release on Season One (2nd May 2011) - which received 5 Star reviews in Total Film ("Short but perfectly formed classics"), Time Out ("One of the best TV shows of all time... astonishing stuff") and Sci-Fi Now ("fresh and timeless... an essential part of sci-fi history... transfer is of the highest standard") comes the 20th June release of The Twilight Zone: The Original Series - Season Two. Featuring all 29 episodes of the second season of Rod Serling's classic, groundbreaking series, now presented in pristine high-definition, this release also comes packed with hours of new and exclusive bonus features not previously available in the UK.

Over the years, The Twilight Zone has been acknowledged as an influence by countless writers and filmmakers, including Steven Spielberg ("I was a complete obsessive-compulsive Twilight Zone follower."), J.J. Abrams ("The Twilight Zone at its best is better than anything else I've ever seen on television."), Joe Dante, John Landis, Wes Craven, George Miller, Clive Barker, Steven King and Michael J. Straczynski.

The Twilight Zone's second season originally ran from 1960 to 1961 and is a stand-out in the series' history thanks to its sheer number of memorable stories. Among the episodes that have achieved pop culture landmark status are the chilling Eye Of The Beholder (in which a disfigured woman undergoes surgery to appear more normal) and The Silence. The Invaders sees star Agnes Moorhead pitted against tiny space travellers, while in Long Distance Call Billy Mumy (of Lost In Space fame) converses with a deceased relative on his toy phone.

As always, the combination of sharp, intelligent scripting (mostly by Serling, but with notable contributions by Charles Beaumont, Richard Matheson, and George Clayton Johnson) and superb casting (guest stars include Cliff Robertson, Dennis Weaver, Burgess Meredith, William Shatner, John Carradine, and Don Rickles) produces television that remains as thought-provoking and entertaining today as it was over 40 years ago.