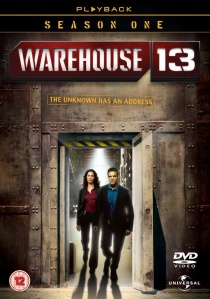 The X-Files meets Moonlighting and Indiana Jones in the quirky US smash-hit, Warehouse 13, available on DVD from 28th June 2010, courtesy of Universal Playback. Refreshingly and wickedly funny and packed with top-notch sci-fi action, Warehouse 13 comes from the mind of Jane Espenson, one of American television's top writers who has steered shows as diverse and popular as Buffy The Vampire Slayer, Battlestar Galactica and Star Trek: Deep Space Nine.

Debuting on SyFy in the States in 2009, the first season of Warehouse 13 immediately went on to become one the channel's biggest successes and now the first collection of adventure is coming to DVD, allowing UK fans to follow the adventures of Secret Service Agents Peter Lattimer (Eddie McClintock, TV's Bones and Desperate Housewives) and Myka Bering (Joanne Kelly, TV's Vanished, Supernatural) as they are tasked with overseeing the mysterious Warehouse 13.

The government's secret hiding place for all manner of supernatural and extra-terrestrial artefacts, the warehouse becomes the agents' base of operations as they are charged with the job of retrieving missing objects and investigating alleged new ones. The cast is rounded out by the brilliant Saul Rubinek (TV's Frasier, Stargate SG-1) and CCH Pounder (TV's The Shield), adding a fantastic acting pedigree to an already brilliantly high-concept show that should keep sci-fi and comedy fans equally happy.

HotUHD
Just as relevant and incendiary now as it was three decades ago, King of New York returns 16th November 2020 on 4K UHD with guns blazing in this definitive special edition from Arrow Video, including a new director-approved 4K restoration. END_OF_DOCUMENT_TOKEN_TO_BE_REPLACED
Top PicksView