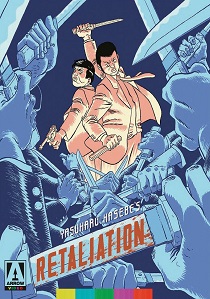 In 1969 future sexploitation specialist Yasuharu Hasebe (Stray Cat Rock: Sex Hunter) teamed up with the inimitable Jô Shishido (Tokyo Drifter, Branded to Kill) for a follow up to their yakuza hit Massacre Gun.

A tale of gang warfare that features a raft of the period s most iconic stars, Akira Kobayashi (Battles Without Honor and Humanity, The Flowers and the Angry Waves) is a yakuza lieutenant who emerges from jail to find his gang dispersed and his aging boss in his sickbed. Shishido is the rival waiting to kill him and a young Meiko Kaji (Lady Snowblood) is the girl caught in the crossfire.

Gritty and cynical, Retaliation, released on dual DVD and Blu-Ray by Arrow Films on 11th May 2015, is a hardboiled precursor to Kinji Fukasaku's revisionist yakuza pictures of the 1970s.

UHD
Fast forward to the 1980s as Wonder Woman's next big screen adventure finds her facing a wide array of foes including Max Lord and The Cheetah as Wonder Woman 1984 flies in on Blu-ray and 4K UHD 22nd March 2021 from Warner ... END_OF_DOCUMENT_TOKEN_TO_BE_REPLACED
Top PicksView