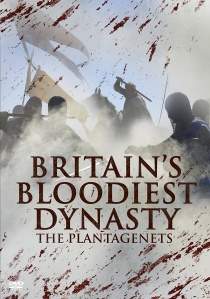 Britain's most notorious and bloody dynasty The Plantagenets were the inspiration for the hugely successful series Game Of Thrones and now the story of this brutal clan is skilfully brought to life in a brand new Channel 5 docu drama, presented by award-winning journalist and acclaimed historian Dan Jones. Britain's Bloodiest Dynasty - The Plantagenets comes to DVD courtesy of RLJ Entertainment's Acorn Label.

Following one of the most shocking periods in British history, this eye-opening historical series brings to life the dynasty who dragged Britain out of the dark ages and into the modern world. Out of the chaos, darkness and violence of the middle ages, one family rose to seize control of England. Generation after generation they ruled the country for more than three hundred years, ruthlessly crushing all competition to become the greatest English dynasty of all time. Britain's Bloodiest Dynasty - The Plantagenets will be released on DVD as a four-part series on 26th January 2015 following its run on Channel 5.

The programme shows history as never seen before, it combines scintillating story-telling from Jones as he delivers his extraordinary new take on one of the most visceral and violent chapters in British History, interspersed with drama reconstruction that brings to life a dramatic and visceral time in England's history. From overbearing fathers and weak sons, to treacherous allies and adulterous wives, bad marriages, cousins at war and best friends turned mortal enemies, we meet extraordinary characters displaying raw human emotions - greed, envy, love and hate. Blood and the pursuit of power are at the heart of every event.

The series begins with Henry II, who is betrayed by his own wife and children when they try to seize the throne after the murder of Archbishop Thomas Becket. Episode two reveals how the powerful friendship between Henry III and Simon de Montfort collapses into hatred and bloody civil war. In Episode three Edward II's obsession with revenge tears England apart. The country is invaded by his adulterous French wife and her lover and it culminates in the killing of Edward himself, with a 'legendary' red hot poker. Finally, episode four tells the story of the boy king and tyrant Richard II one of the most vicious and inventive despots in English history.