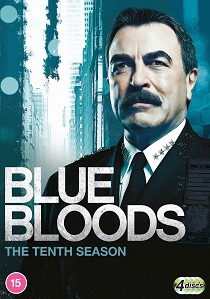 Season 10 of Blue Bloods picks up with newlyweds Jamie (Will Estes) and Eddie (Vanessa Ray) attempting to balance the rocky terrain of their work and personal lives.

In her role as Trial Bureau Chief, Erin Reagan (Bridget Moynahan) confronts the realities of a job that tends to be more political than she would like, and often puts her at odds with her father or brothers. Detectives Danny Reagan (Donnie Wahlberg) and Maria Baez (Marisa Ramirez) uncover and solve even more distressing crimes, and Frank Reagan (Tom Selleck) continues to confront trouble from 1 Police Plaza.

No matter what may arise, however, the Reagans and their family values never fail to make it home for Sunday dinner.

DVD
A teenage murder witness finds himself pursued by twin assassins in the Montana wilderness with a survival expert tasked with protecting him as Those Who Wish Me Dead arrives on DVD and Blu-ray 30th ... END_OF_DOCUMENT_TOKEN_TO_BE_REPLACED
Top PicksView