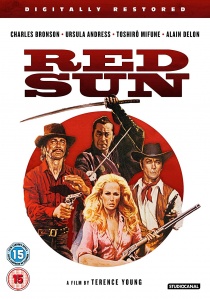 Red Sun comes to Blu-ray and DVD on 19th October 2015 in one of the wildest, and weirdest westerns ever made, where a cowboy and a samurai team up on a revenge mission.

With a cast made up stars from America, Japan, France and Switzerland, directed by a Brit who brought James Bond to the screen and written by the scriptwriter of The Magnificent Seven, Red Sun is a buddy movie with gratuitous violence and nudity. It's rated by no less an authority than Quentin Tarantino as one of the best spaghetti westerns ever made, alongside the likes of The Good, The Bad and the Ugly and A Fistful of Dollars.

Charles Bronson and Alain Delon are robbers who hold up a train and steal a shipment of gold, and a samurai sword the Japanese ambassador was to present to the president. When Bronson is double crossed by his partner, he joins forces with the ambassador's sole remaining samurai guard, Toshiro Mifune, to hunt down his treacherous Delon.

Red Sun certainly has an eclectic cast - Hollywood hard man Charles Bronson from Once Upon a Time in the West and The Dirty Dozen plays The Gunfighter: He made the land run red under a blood-stained sun!

French crime film superstar Alain Delon from Le Samourai and Le Cercle Rouge plays The Outlaw: He killed for money, for women and for excitement! Sex symbol Ursula Andress, famous for that iconic beach scene in Dr No plays The Tigress: She had the weapons to handle any kind of man! And Japanese screen legend Toshiro Mifune from Seven Samurai and Throne of Blood plays The Samurai: He bought a new kind of weapon to the West! Together they were billed as 'The greatest fighting force the West has ever known'. It's an audacious line up that works beautifully.

Related Articles
The Great Escape, Once Upon A Time In The West, Violent City
The 10th Victim, Dr. No
Plein Soleil: Special Edition, Asterix At The Olympic Games, Mr. Klein
Walk on the Wild Side
Comments
DVD Releases News Pick

DVD
For the first time in the cinematic history of Spider-Man, our friendly neighborhood hero's identity is revealed in Spider-Man: No Way Home, released on DVD, Blu-ray and 4K UHD 4th April 2022 from Sony Pictures Home ... END_OF_DOCUMENT_TOKEN_TO_BE_REPLACED
Top PicksView