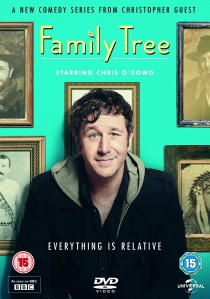 From the mind that brought you This is Spinal Tap and Best in Show comes an eccentric new comedy about one man's mission to find himself, one relative at a time, as Family Tree arrives on DVD from 23rd September 2013 from Universal Pictures UK.

Family Tree follows the unusual life of 30 year old Tom Chadwick, who has recently lost his job and girlfriend and inherits a mysterious box of belongings from a great aunt that he never met. Deciding to embark on his own journey of self discovery he starts investigating his family lineage and uncovers a whole world of unusual stories and characters and a growing sense of who he is and who his family are.

Family Tree features side-splitting bonus features including hilarious deleted scenes, a brilliant soundtrack composed by Christopher Guest and the full spoof television programmes used in the show. This must-watch series will have you laughing out loud at blind dates, puppet monkeys and pantomime horses, as you embark upon Tom Chadwick's bizarre mission to find his long lost ancestors as Family Tree comes on DVD from 23rd September 2013, courtesy of Universal Pictures (UK).

BD
In Brian And Charles, released on DVD and Blu-ray 10th October 2022 from Mediumrare, an inventor lives alone in a remote village in the countryside, inventing useless things out of found objects in his garage. That is until ... END_OF_DOCUMENT_TOKEN_TO_BE_REPLACED
Top PicksView