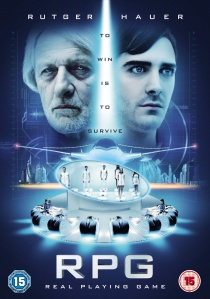 Stricken and suffering with a terminal disease, multi-millionaire Steve Battier (Rutger Hauer, Blade Runner, Batman Begins) is desperate to be young again. Prepared to risk all, Battier approaches RPG, a biotechnological company with the ability to displace age, pain and reality.

Submerging the rich in an extreme, revitalizing experience, a ten-hour game ensues. The players awaken in unfamiliar territory and transformed physiques. Faced with the reminder of their old-age holograms, the deadliness of the rules are quickly established and play begins.

In the body of a 23- year old, Battier soon realizes that to be the sole survivor means a guarantee of eternal youth and as the clock ticks and the game darkens, the players ust find out the price they are truly willing to pay...

Directed by Tino Navarro and David Rebordão and starring Rutger Hauer, RPG is released on DVD and Blu-ray on 8th September 2014, courtesy of Kaleidoscope Home Entertainment.