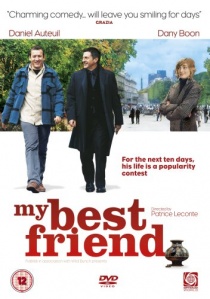 Directed by Patrice Leconte (The Girl on the Bridge, Intimate Strangers) and starring Daniel Auteuil (Hidden) and Dany Boon, My Best Friend, released by Optimum Home Entertainment on 17th September 2007, is a hilarious and affecting tale of friendship and love.

Francois is a middle-aged antique dealer with a stylish apartment and a fabulous life. However, when forced at a group dinner to consider his "dearest" acquaintances, he is blindsided by the revelation that none of them actually likes him. He's arrogant, self-centred and harsh, and they don't believe he even has one true friend. His business partner Catherine makes him a bet; if he can produce his best friend, she will let him keep the antique Greek vase he acquired that afternoon on the company tab. If not, it's hers.

Moving through Paris on a futile search for someone to fit the bill, he keeps encountering a trivia spouting, big-hearted cabbie named Bruno. Bruno's chatty, lowbrow ways grate against Francois's designer temperament, but he covets the others man's easy way with people.He convinces Bruno to teach him how to make friends and sets about learning the "three S's" - being sociable, smiling and sincere - though they don't come easy. As the search continues, is the answer to Francois' problem sitting right beside him in the taxi?

DVD
After more than thirty years of service as one of the Navy's top aviators, Pete 'Maverick' Mitchell is back where he belongs as Top Gun: Maverick flies onto DVD, Blu-ray and 4K UHD 31st October 2022 from Paramount Home ... END_OF_DOCUMENT_TOKEN_TO_BE_REPLACED
Top PicksView