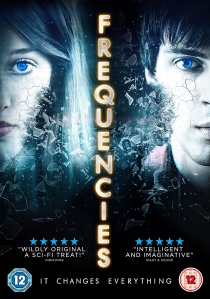 In a dystopian future, children's ability to succeed in life is determined at a young age, based on their own personal 'frequency' which dictates just how lucky they will be. In the process of testing one particular group, it transpires that Marie (Lily Laight - Love Rosie, Les Miserables) has an impossibly high frequency, making her the luckiest girl in the world. At the same testing, Zak (Charlie Rixon) is discovered to have a frequency so low it measures as a negative number.

Despite the polar differences in their predetermined futures, Zak and Marie grow closer, undertaking various experiments to understand the meaning behind their interactions and the results of ultra high and low frequency interaction. As they reach adolescence, Zak (Daniel Fraser - The Patrol, Scar Tissue) becomes desperate to alter their frequencies so that he and Marie (Eleanor Wyld - Misfits, Black Mirror) can be together, and with the help of his friend, Theo (Owen Pugh), devotes his life to finding a way. However, when he finally makes a huge breakthrough, the repercussions stretch further than he could possibly imagine, causing everyone he once trusted to turn on him...

A mind-bending sci-fi romance, Frequencies has already generated huge buzz at festivals- featuring superb performances, including a wonderful supporting turn from Joanna Hole (Pusher, Half Light), this uniquely ambitious story will provoke, captivate and ultimately leave you wondering just how responsible for your own fate you truly are...