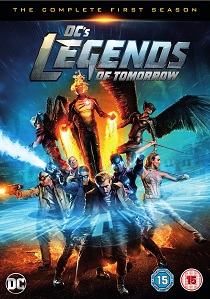 Control your own fate and catch up with DC's Legends of Tomorrow as Warner Home Video releases the complete first season of the epic series on Blu-ray and DVD on 29th August 2016.

From the creators of The Flash and Arrow comes this Super Hero team-up that combines characters from both series, as well as new heroes from the DC Comics pantheon. Having seen the future, one he will desperately try to prevent from happening, time-traveling rogue Rip Hunter is tasked with assembling a disparate group of both heroes and villains to confront the unstoppable threat of the immortal Vandal Savage... a threat which not only puts the world at stake, but all of time itself.

DVD
Tender and violent, terrifying and comic, The English, released on DVD 19th December 2022 from Dazzler Media., takes the arrows and bullets of its genre only to twist them into a uniquely compelling parable on gender, race, ... END_OF_DOCUMENT_TOKEN_TO_BE_REPLACED
Top PicksView