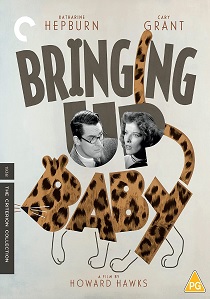 Bringing Up Baby: The Criterion Collection (1938)

NewsComedyRomanceKatharine HepburnCary GrantCriterion
News Article Go back to homepage
Screwball sparks fly when Cary Grant and Katharine Hepburn let loose in one of the fastest and funniest films ever made as Bringing Up Baby is given the Criterion treatment and released on Blu-ray 26th July 2021 from Sony Pictures Home Entertainment.
Cary Grant, Katharine Hepburn, Charles Ruggles, Barry Fitzgerald, George Irving, Fritz Feld
Howard Hawks
Howard Hawks
Sony Pictures Home Entertainment
1 hour 42 minutes
26/07/2021
#BringingUpBaby
Thank you for supporting DVD365.net when you order using the link(s) below. As a member of the Zavvi affiliate program we earn from qualifying purchases
Buy BD
Information

Screwball sparks fly when Cary Grant (Charade) and Katharine Hepburn (The Philadelphia Story) let loose in one of the fastest and funniest films ever made - a high-wire act of invention that took American screen comedy to new heights of absurdity.

Hoping to procure a million-dollar endowment from a wealthy society matron for his museum, a hapless palaeontologist (Grant) finds himself entangled with a dizzy heiress (Hepburn) as the manic misadventures pile up-a missing dinosaur bone, a leopard on the loose, and plenty of gender bending mayhem among them.

Bringing Up Baby is given the Criterion treatment and released on Blu-ray 26th July 2021 from Sony Pictures Home Entertainment.