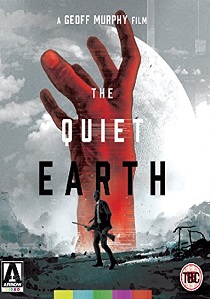 NewsScience FictionFantasy
News Article Go back to homepage
Haunting, surreal and inscrutable, adapted from the 1982 novel of the same name, The Quiet Earth, released on Blu-ray 18th June 2018 from Arrow Films, has attained cult status as one of the most distinctive post-apocalyptic sci-fi movies of the 1980s.
Bruno Lawrence, Alison Routledge, Pete Smith, Anzac Wallace, Norman Fletcher
Geoff Murphy
Sam Pillsbury, Don Reynolds
Arrow Films
1 hour 31 minutes
18/06/2018
#TheQuietEarth
Thank you for supporting DVD365.net when you order using the link(s) below. As an Amazon Associate we earn from qualifying purchases
Buy BD
Information

Zac Hobson (Bruno Lawrence, As Time Goes By), a scientist working on a pioneering energy project, wakes up one morning to find that the technology has malfunctioned, leaving him as seemingly the only man left on earth. As Zac wanders the deserted city of Hamilton, New Zealand, hoping to find some remnant of life besides himself, his mind begins to disintegrate until fantasy and reality blur together in a heady, terrifying cocktail.

Directed by Geoff Murphy (Under Siege 2, Freejack) and adapted from the 1982 novel of the same name, The Quiet Earth has attained cult status as one of the most distinctive post-apocalyptic sci-fi movies of the 1980s. By turns haunting, surreal and inscrutable, the film asks questions about humankind's insatiable appetite for destruction that are arguably as prescient today as they were at the time of its release thirty years ago.

The Quiet Earth is released on Blu-ray 18th June 2018 from Arrow Films.

BD
A 13-year-old girl named Meilin turns into a giant red panda whenever she gets too excited in Disney and Pixar's 25th feature film Turning Red, released on DVD, Blu-ray and 4K UHD 2nd May 2022 from Walt Disney Home ... END_OF_DOCUMENT_TOKEN_TO_BE_REPLACED
Top PicksView