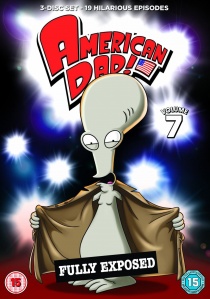 Seth MacFarlane and the creators of Family Guy welcome one of the most surreal and irreverent comedy shows on TV to DVD once again on 14th May 2012 as American Dad: Volume 7 is released courtesy of Twentieth Century Fox Home Entertainment.

The hit show follows Stan Smith, a CIA agent in Langley Falls, VA, whose main objective in life is national security. His family, a talking goldfish and an alien rescued from Area 51 keep Stan busy while he tries to prevent the ongoing threat of terrorist activity in the U.S.

This season of American Dad hits a new comedy milestone as the series celebrates its 100th episode; '100 A.D, with an unexpected Smith family wedding! As the season progresses, wife Francine sees a hypnotherapist to remember elements of her repressed past, Roger the alien and Stan attempt to open a restaurant together, Fran starts working in construction and Steve gets stuck in the gorilla cage at the local zoo.

American Dad: Volume 7 on DVD is packed full of extra features including commentaries by cast and crew, deleted scenes and a featurette on American Dad at Comic-Con. With and edgy and satirical humour you won't find anywhere else, this season is a must-have for all fans.