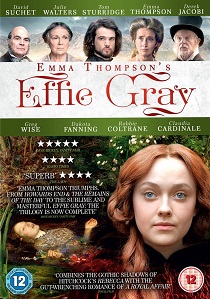 Written by Oscar-winning Emma Thompson and from the producers of the cinematic masterpieces Howard's End and Tree of Life, Effie Gray, released on DVD on 23rd February 2015 courtesy of Metrodome, explores the scandalous true story of the troubled relationship between Victorian art critic John Ruskin and Effie, his teenage bride.

After marrying at the tender age of 19, Effie quickly realises her marriage is a lie when Ruskin refuses to consummate it. Yearning for affection, she soon falls for the charms of the artist John Everett Millais. Desperate to be freed from John, Effie embarks on a life-changing journey to become one of the first women in history to seek a divorce from her husband, making her an everlasting figure in feminist history.

The film is produced by Andreas Roald and former President of Merchant Ivory Productions Donald Rosenfeld, who created such cinematic masterpieces as The Remains of the Day and Howards End and also recently produced Terence Malick's Tree of Life. Effie Gray was filmed in the Scottish Highlands, London, and Venice, Italy. Andrew Dunn (Gosford Park, The Madness of King George) is the cinematographer and two-time Academy Award nominated Ruth Myers (LA Confidential, Emma) designed the costumes. Paul Cantelon (The Diving Bell and the Butterfly) composed the score.

Related Articles
American Pastoral, The Benefactor, Yellowbird, Night Moves, Very Good Girls, The Motel Life, Now Is Good, Coraline 3D, The Secret Life of Bees, The Secret Life of Bees, Charlotte's Web, Hide and Seek, Man on Fire, Ocean's 8, The Alienist: Season 1, Once Upon a Time... in Hollywood, Once Upon A Time In Hollywood, Effie Gray
National Treasure, Mona Lisa, The Comic Strip Presents: The Best Of, Brave, The Very Best Of Friday Night Live, Harry Potter and the Order of the Phoenix, Saturday Live: The Best Of Series 1, Goldeneye, Harry Potter and the Order of the Phoenix, Effie Gray
The Hollow Crown: The Wars of The Roses, Far From the Madding Crowd, On The Road, Effie Gray
All Roads Lead To Rome, 8 1/2, Once Upon A Time In The West, Fitzcarraldo: 25th Anniversary Edition
River, Him & Her: Series 3, The Job Lot, Him & Her: Series 2, Him & Her: Series 2, Mrs Wilson, The Night Watch, Honour, Effie Gray, The Thief, His Wife and The Canoe
Walking On Sunshine, Johnny English, Military Wives, Effie Gray
For your consideration 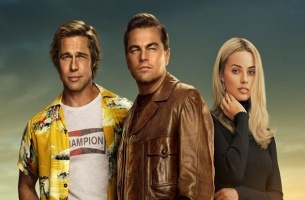 HotDVDBDUHD
The ninth film from the writer-director Quentin Tarantino features a large ensemble cast and multiple storylines in a tribute to the final moments of Hollywood's golden age as Once Upon a Time... in Hollywood arrives on DVD, Blu-ray and 4K UHD 9th December 2019 from Sony ... END_OF_DOCUMENT_TOKEN_TO_BE_REPLACED
Comments
BD Releases News Pick