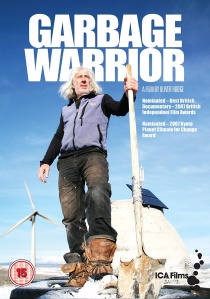 For 30 years New Mexico-based Reynolds and his green disciples have devoted their time to advancing the art of "earthship biotecture" by building self-sufficient, off-the-grid communities where design and function converge in eco-harmony. Using beer cans, car tyres and water bottles instead of bricks and mortar renegade architect Michael Reynolds uses these materials as tools of choice for producing thermal mass and energy-independent housing.

Through the process of trial and error, once making a house hot enough to melt plastic, Michael and his team hone the 'earthship' technology, developing and tweaking new ideas and solutions. However, these experimental structures that defy state standards create conflict between Reynolds and the authorities and he finds architectural licence revoked. Frustrated by legislation, Reynolds lobbies for the right to create a sustainable living test site. It is only in the wake of natural disasters like the Boxing Day Tsunami and Hurricane Rita in Mexico that Michael can show in practice how this new form of housing can be part of the solution to the challenges of the changing global environment.

Garbage Warrior is released on DVD on 12 January 2009 by ICA Films. Shot over three years and in four different countries this film is a timely portrait of a determined visionary, a hero for the 21st century.

BD
A stellar cast sizzles in Heat, a taut psychological drama about an obsessive detective and a brilliant thief whose fates are linked in the aftermath of a high-stakes securities heist, released on 4K UHD 8th August 2022 from ... END_OF_DOCUMENT_TOKEN_TO_BE_REPLACED
Top PicksView