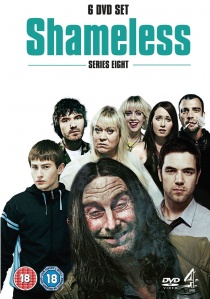 Channel 4's longest running, multi award-winning series Shameless is back with 4DVD releasing the DVD box-set release of Series 8 on 9th January 2012! This series of the offbeat drama includes 22 episodes and features the introduction of yet another dysfunctional family, the Powells and also sees Shameless celebrating its 100th episode!

Shameless Series 8 kicks off with a Chatsworth Estate party and it's not just any party - it's Frank's (David Threlfall) stag night! He's getting married to the love of his life, his romantic narcoleptic librarian third bride-to-be, Libby (Pauline McLynn). Then, as the clock strikes midnight, Frank disappears. The mystery of Frank's whereabouts is a veritable magical mystery tour into the previously unexplored outer-limits of Frank's drink and drug-addled mind.

With Frank missing, a dark cloud spoils the party spirit when a previous Mrs Gallagher, Monica (Annabelle Apsion) returns to lay claim on her family....

Meanwhile at the Maguires, Mimi (Tina Malone) is back in the nest with her surprise new baby Cilla, with whom Micky (Ciaran Griffiths) discovers his talent as a surrogate father - but the question remains, who's the Daddy?

Nestled in between the Gallaghers and the Maguires is a new family: home-brewing fun and firey housewife Avril Powell (Karen Bryson) and mild-mannered, until he's had a drink, trainee teacher Jackson Powell (Emmanue Ighodaro), plus their chronically, irretrievably thick, but gorgeous teenage daughter Letitia (Kira Martin).

But as the truth behind Frank's disappearance is revealed the question still remains, will he get back in time for his nuptials or will Libby be left at the altar?

Ride the emotional rollercoaster and be surprised, shocked and entertained by the consistently delivering drama that is Shameless Series 8 - available on DVD 9th January 2012.

The new series of Shameless Series 9 airs at 10pm, Tuesdays from 10th January 2012 on Channel 4

UHD
In Disney's Mulan, released on DVD, Blu-ray and 4K UHD 10th November 2020, a fearless young woman risks everything out of love for her family and her country to become one of the greatest warriors China has ever known. END_OF_DOCUMENT_TOKEN_TO_BE_REPLACED
Top PicksView