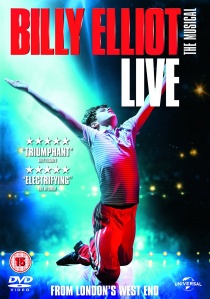 Bring the magic of London's West End into your very own living room as the curtain rises on Billy Elliot The Musical Live, available on Blu-ray, DVD and Digital Download on 24th November 2014, from Universal Pictures (UK). On Sunday, September 28th, a breathtaking performance of Billy Elliot the Musical was broadcast from London's Victoria Palace Theatre live to cinemas across the UK and around the globe reaching number 1 at the UK cinema box office, a first in the history of event cinema.

Featuring a special introduction by Academy Award® nominated director Stephen Daldry (The Reader, The Hours, Billy Elliot), Billy Elliot The Musical Live captures an extraordinary performance by a phenomenally talented cast, including the spine-tingling moment when twenty-five current and former Billy Elliots unite on stage for a specially choreographed 'mash-up' finale. Past stars, including all three original Olivier Award winning 'Billys' (James Lomas, George Maguire and Liam Mower) are joined by current stars Elliott Hanna, Bradley Perret, Ollie Jochim and Matteo Zecca for this show-stopping number that will take your breath away.

In another unique performance, Liam Mower, the first boy ever to play the role of Billy Elliot on stage, returns in the role of 'Older Billy' for a mesmerising performance of 'Dream Ballet', joined by Elliott Hanna who plays the role of Billy Elliot. Joining them on stage is the inimitable Ruthie Henshall (Miss Saigon, Chicago, Cats) as Billy's dance teacher Mrs Wilkinson, Deka Walmsley (The Pitmen Painters) as Billy's dad, Zach Atkinson as Billy's friend Michael, Chris Grahamson (The Recruiting Office, Coronation Street) as Tony and original cast member Ann Emery as Grandma.

Set in a northern mining town, against the background of the 1984/'85 miners' strike, Billy Elliot is the inspirational story of a young boy's struggle against the odds to make his dream come true. Billy's journey takes him out of the boxing ring and into a ballet class where he discovers a passion for dance that inspires his family and whole community and changes his life forever.

Experience Billy Elliot The Musical Live and feel your heart warm to the incredible tale of a young boy who reaches beyond his place in the world to follow his passions and fight for his dreams. Don't miss this milestone in family entertainment as Billy Elliot The Musical Live pirouettes its way onto Blu-ray, DVD and Digital Download on November 24th.

UHD
The surviving members of the resistance face the First Order once again, and the legendary conflict between the Jedi and the Sith reaches its peak as Star Wars: The Rise of Skywalker is released on ... END_OF_DOCUMENT_TOKEN_TO_BE_REPLACED
Hot PicksView