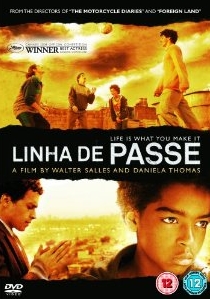 From Walter Salles and Daniela Thomas, acclaimed directors of The Motorcycle Diaries, comes the stunning urban road-movie Linha de Passe, telling the story of four young brothers and their pregnant mother as they struggle to redefine their futures against the backdrop of Brazil in crisis. Winner of the Best Actress Award® at the Cannes Film Festival for Brazilian actress Sandra Corveloni's stunning performance, and nominated for the Golden Palm®, Linha de Passe is released to buy and rent on DVD on 26th January 2009 from Pathé Distribution Ltd.

Sao Paulo. 20 million inhabitants, 200 kilometres of traffic jams, 300,000 motorcycle messengers. At the heart of one of the toughest, most chaotic cities in the world, the search for a missing father blends with the dreams of a football career, the desire to be recognised and a yearning to cross the boundaries of race and class.

Inter-woven with their plight lies the city of São Paulo, criss-crossed by speeding messengers on motorcycles, drumming from the bleachers of soccer-stadiums, the singing of hymns in the ever-growing Pentecostal churches, and the belt of poverty around the carpet of high rises. The film is the reflection of a country that, like the four brothers in the film, is desperately searching for a way out...

Linha de Passe was written by Bráulio Mantovani (City of God) and introduces a host of young talent making their feature film debuts, including Vinícius de Oliveira, João Baldasserini, José Geraldo Rodrigues and Kaíque Jesus Santos. Engaging, energetic, funny and compelling - life is what you make it with Linha de Passe on DVD this January.