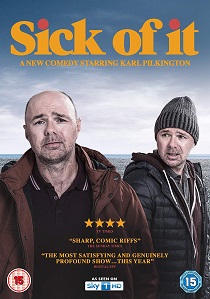 NewsTV SeriesComedy
News Article Go back to homepage
Sick Of It, released on DVD 19th November 2018 from 2Entertain, is the brand new series from Karl Pilkington, star of An Idiot Abroad and The Moaning of Life.
Karl Pilkington, Sondra James
Richard Yee
John Pocock
2Entertain
2 hours 12 minutes
19/11/2018
#SickOfIt
Thank you for supporting DVD365.net when you order using the link(s) below. As an Amazon Associate we earn from qualifying purchases
Buy DVD
Information

Sick Of It, released on DVD 19th November 2018 from 2Entertain, is the brand new series from Karl Pilkington, star of An Idiot Abroad and The Moaning of Life.

Sick Of It follows Karl after he loses his girlfriend and way in life, and finds himself living with his elderly American auntie. As he struggles to deal with the modern world his closest companion is the voice in his head - a grumpy, misanthropic alter ego who takes the form of his doppelgänger. He's the uncensored version of Karl, who says what he really thinks without the risk of offending others.

As Karl attempts to get his life in order and move on, the voice in his head appears to criticise him, offer advice, and dispense witty words of wisdom.