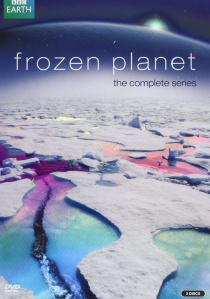 Embark on the trip of a lifetime, as Planet Earth's award winning team take you on the ultimate polar expedition into a breathtaking landscape in Frozen Planet, released on DVD and Blu-Ray on 8th December 2011 from 2entertain.

Frozen Planet airs on BBC One this Autumn and will be presented by the legendary Sir David Attenborough for perfect prime time viewing. This amazing Frozen Planet DVD and Blu-Ray release comes in deluxe holographic packing and includes exclusive footage of the Frozen Planet teams unprecedented access to film the story of the South Pole Station - the most extreme and remote scientific research base on earth.

This landmark high definition series brings to the screen the frozen wilderness of the polar region for what could be the last time before they change forever, with the effects of global warming more evident in the Arctic and Antarctic than anywhere else on the planet.

Ambitious and epic in scale, it is the ultimate portrait of the Polar Regions, capturing all the fragile, jaw-dropping beauty and majestic power of the elements in the greatest landscapes on Earth. Featuring the incredible wildlife cinematography that made Planet Earth a worldwide success, Frozen Planet has taken new technology to the most extreme and remote parts of our planet capturing groundbreaking imagery above and below the ice.

Encounter spectacles that few of us will ever witness. Go deep under the sea-ice into a magical world of giants, plunge into the heart of an erupting polar volcano and fly to the South Pole across the Antarctic icecap - the largest concentration of ice on our planet - retracing the steps of the great polar explorers. Get closer than ever before to the lives of our best loved and most charismatic animal characters - polar bears, penguins, wolves and orcas, and witness the most extraordinary examples of survival against the odds as can be found anywhere on our planet.

Narrated by acclaimed naturalist Sir David Attenborough and produced by Vanessa Berlowitz and Alastair Fothergill. This is the poles as you have never seen them, and may never see them again.

UHD
Based on the bestselling comic book, Vin Diesel stars as Ray Garrison, a soldier recently killed in action and brought back to life as the superhero Bloodshot, available 8th June 2020 from Sony ... END_OF_DOCUMENT_TOKEN_TO_BE_REPLACED
Top PicksView