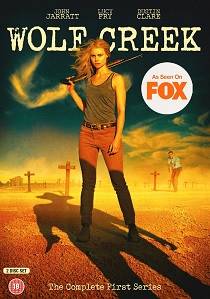 Murderous psychopath Mick Taylor (John Jarratt) returns in Wolf Creek, an epic 6-part continuation of the international horror film sensation of the same name. Mick still prowls the Australian Outback, brutally murdering any tourists unfortunate enough to cross his path, and having a ripper of a time doing it.

It s business as usual for Mick when he comes across the Thorogood family, on holiday to experience the outdoors, enjoy the open road, and help their 19-year-old daughter Eve (Lucy Fry) overcome her addiction to painkillers. Mick targets the family and a bloody massacre ensues, but this time, things are different. Eve survives (barely) and manages to escape. After recovering from her injuries, Eve sets out on a cross country mission of vengeance, determined to hunt down Mick Taylor and end his killing spree once and for all. The hunter has become the hunted.

Highly cinematic in style and filled with all the bloody violence and dark humour that made the original film a sensation, Wolf Creek is a horror series like no other, and is not to be missed. First shown on Fox UK in August / September 2016, the 6-part mini-series will be available to purchase on Blu-ray and DVD as a 2-disc Blu-ray set and a 2-disc DVD set on 10th October 2016, two days after the series finale has aired on Fox UK.

UHD
The end of the line is only the beginning in a wild, non-stop thrill ride through modern-day Japan as Bullet Train is released on DVD, Blu-ray and 4K UHD 24th October 2022 from Sony Pictures Home Entertainment END_OF_DOCUMENT_TOKEN_TO_BE_REPLACED
Top PicksView