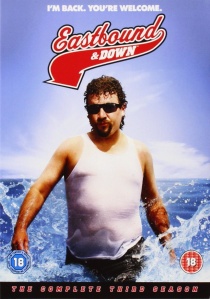 Kenny Powers is back for another hit of hilarious mayhem in Eastbound & Down: The Complete Third Season releasing on DVD and Blu-ray on 8th October 2012 from HBO Home Entertainment.

He's as arrogant, insulting and irresistible as ever, as the new King of Myrtle Beach faces more competition than ever before! For more ridiculous chaos, Eastbound & Down: Seasons 1, 2 & 3 is also released on DVD and Blu-ray on the same day in a striking baseball-themed boxset.

This raw-and-raunchy comedy series about the burned-out former major league pitcher shows Kenny's boorish behaviour brought back to South Carolina. Season 3 sees the return of Kenny one year after returning from Mexico, or as he calls it "the asshole of America", where his baseball comeback continues in the minors. Now playing for Myrtle Beach Mermen, he tries to balance the responsibly of fatherhood and mend his relationship with April - will he be able to complete his quest back to the major league?

Packed with exclusive bonus material, the extra content comprises of a Season 1 and 2 recap, a bloopers reel, deleted scenes, a Dinner at Scheaffers featurette and audio commentaries with Danny McBride to keep you even more amused throughout the series.

Prepare yourself for some laugh-out-loud, outrageous entertainment as Eastbound & Down: The Complete Third Season is out on DVD and Blu-ray on 8th October 2012. For the complete package,Eastbound & Down: Seasons 1, 2 & 3 is also out on the same day from HBO Home Entertainment.