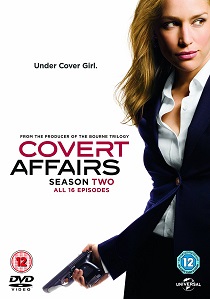 After the runaway success of season one, the sexy and action packed undercover spy series, Covert Affairs returns on DVD for a second season on 17th September 2012 from Universal Playback. Starring Golden Globe® nominee, Piper Perabo (Cheaper By The Dozen, Coyote Ugly), Christopher Gorham (Ugly Betty, Love Bites) and Peter Gallagher (The O.C., Burlesque) and from the producer of The Bourne Trilogy - Doug Liman - don't miss Really's most popular TV show as it makes its way to DVD.

Hit series Covert Affairs stars Piper Perabo as Annie Walker, a young Central Intelligence Agency (CIA) operative whose exceptional linguistic skills and spot on instincts make her invaluable to the Agency. In season two, Annie's personal and professional lives crash into one another and the balance of her relationships are forever changed.

After last season ended with Annie (Perabo) and Ben (Bailey) revisiting their past on the other side of the world in Thailand, Covert Affairs: Season Two sees the pair return to Washington. The CIA lifestyle sees Annie faced with a host of new missions and assignments with Ben returning to his usual vanishing antics.

Annie becomes increasingly comfortable in her new role but has to readjust to a new operative at work. She travels across the world on her new assignments but when problems arise in Belarus, Jai (Ramamurthy) is there to save the day.

HotDVDTV
Featuring every episode of the entire series in an 8-disc box set, the hilarious BBC comedy Keeping Up Appearances is released on DVD 28th November 2022 ... END_OF_DOCUMENT_TOKEN_TO_BE_REPLACED
Top PicksView