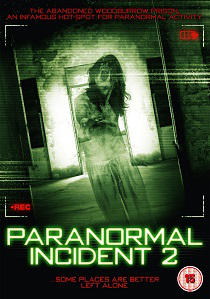 Arrow Films announces the release of chilling horror Paranormal Incident 2 for the first time on DVD.

Directed by David Chirchirillo the film follows a team of special agents as they become embroiled in dark and disturbing events at an abandoned prison, but their plight only comes to light when a mysterious DVD turns up a young mother's house revealing footage of the sinister incident. Paranormal Incident 2 makes its debut on DVD on 8th July 2013.

Woodburrow Prison: A near-derelict institution that once incarcerated the criminally insane is now a bone-fide paranormal hot-spot, rumoured to be the very location from which an FBI Paranormal team never returned a decade or so earlier. Special Agent Watts, and his own elite FBI team, gather at the infamous Woodburrow to undertake a 'Demo Op', but there is something dark and sinister going on inside the blood-streaked walls, that is even beyond their combined imaginations.

At first a mysterious woman is found alive in one of the chambers and whilst she is interrogated the rest of the team venture further into the labyrinth where things begin to spiral wildly out of control as an evil force picks the team off one by bloody one...

Come face to face with pure evil in Paranormal Incident 2.

HotUHD
After moving to a new town, two brothers discover that the area is a haven for vampires as the classic The Lost Boys is released on 4K UHD 20th September 2022 from Warner Home Video. END_OF_DOCUMENT_TOKEN_TO_BE_REPLACED
Top PicksView