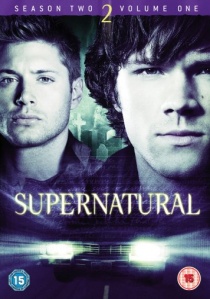 The boys are back and this time they really mean business! Sam and Dean Winchester return to their wise-cracking, demon-slaying search for the truth as Warner Home Video releases Season Two, Part One of the smash hit show Supernatural on DVD from 14th May 2007.

Following the runaway success of Season One in 2006, Supernatural Season Two (Parts One & Two) are set to be must-own box sets for TV fans in 2007. Heavy on genuinely frightening, big budget horror scenes and featuring the sexiest pair of male leads on TV, this ratings-grabbing ITV drama series is part road-trip and part sci-fi revenge mission as two brothers bound by tragedy travel through the wilderness searching for their demon that still torments their family, hunting down and destroying every evil supernatural force they encounter along the way.

Fans of the show don't need to wait until the end of the series broadcast to get their hands on Jensen Ackles (Dean Winchester) and Jared Padalecki (Sam Winchester) as the Part One box set is released mid-broadcast. This means fans can relive their favourite moments or catch up on any episodes missed. Part Two of the series will be released following the conclusion of the TV run.

Twenty-two years ago, Sam and Dean Winchester lost their mother to a mysterious and demonic supernatural force. As a result their father John raised the brothers to be soldiers. He taught them about the paranormal evil that lives in the dark corners and on the back roads of America...and he taught them how to kill it. One day Dean appeared on Sam's doorstep with troubling news: their father had gone missing on a "hunting trip.".

Sam and Dean have spent the last year cruising the highways of the United States in their 1967 Chevy Impala, searching for their lost father and encountering creatures that most people believe exist only in folklore, superstition and nightmares. Along the way, they have battled the various supernatural threats--and each other as well, for their sibling rivalries and conflicts were never far from the surface. Finally, they found their father, just as he was closing in on the Demon who claimed their mother...