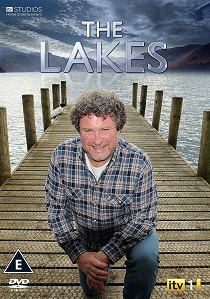 Rory McGrath embarks on a stunning journey in The Lakes, released by ITV Studios Home Entertainment on 17th January 2011, looking at life in one of Britain's favourite holiday destinations. This 2-disc DVD takes the viewer through the busy summer season exploring the breathtaking surroundings of the Lake District and the characters who inhabit it.

From the peaks of its highest mountains to the depths of its deepest lakes the Lake District is a part of the world renowned for its beauty and its influence on some of Britain's greatest poets and writers. With 800 square miles of rugged landscape, towering mountains and breathtaking views it's not hard to understand why 15 million tourists descend on this stunning part of the North of England. From Windermere to Derwentwater, Coniston to Ullswater, sixteen lakes give this district its name.

Series 1 follows hoteliers preparing for dream lakeside weddings, tour guides welcoming visitors from far afield as Japan, and a tea room owner preparing to open her doors for the first time. But this is a place where danger also lurks and in this series we see the mountain rescue team and lake wardens hard at work across the busy summer.

Amanda Davies' dream of running a tea shop in Windermere really does come true, there is traffic chaos at the end of the Summer Westmorland County Show and hotelier Thomas Noblett leaves the Lakes for his biggest challenge yet - swimming the English Channel.

BD
A stellar cast sizzles in Heat, a taut psychological drama about an obsessive detective and a brilliant thief whose fates are linked in the aftermath of a high-stakes securities heist, released on 4K UHD 8th August 2022 from ... END_OF_DOCUMENT_TOKEN_TO_BE_REPLACED
Top PicksView