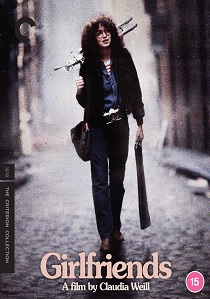 When her best friend and roommate abruptly moves out to get married, Susan (Thirtysomething's Melanie Mayron), trying to become a gallery artist while making ends meet as a bar mitzvah photographer on Manhattan's Upper West Side, finds herself adrift in both life and love. Could a new job be the answer? What about a fling with a married, older rabbi (The Magnificent Seven's Eli Wallach)?

A wonder of American independent filmmaking whose remarkably authentic vision of female relationships has become a touchstone for makers of an entire subgenre of films and television shows about young women trying to make it in the big city, this 1970s New York time capsule from Claudia Weill (It's My Turn) captures the complexities and contradictions of women's lives and relationships with wry humour and refreshing frankness.

With a newly restored 4K digital transfer, Girlfriends is given the Criterion treatment and released on Blu-ray 16th November 2020 from Sony Pictures Home Entertainment.

DVD
For the first time in the cinematic history of Spider-Man, our friendly neighborhood hero's identity is revealed in Spider-Man: No Way Home, released on DVD, Blu-ray and 4K UHD 4th April 2022 from Sony Pictures Home ... END_OF_DOCUMENT_TOKEN_TO_BE_REPLACED
Top PicksView