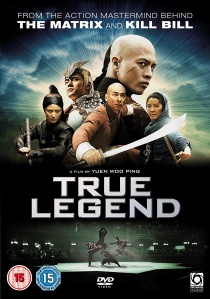 It's time for a kung-fu feast as True Legend comes to cinemas in 3D on 24th September 2010, followed by the 2D release on DVD, Blu-ray and digital download from 25th October 2010 from Optimum Home Entertainment. The world-renowned and critically acclaimed martial arts choreographer and director Yuen Woo Ping (The Matrix Trilogy, Kill Bill 1 & 2, Crouching Tiger, Hidden Dragon) returns for an action packed frenzy centered on the life of Chinese folk hero Su Qi-er.

Serving up non-stop action with a cast led by bond girl Michelle Yeoh (Crouching Tiger, Hidden Dragon, Memoirs of a Geisha) and including Vincent Zhao (Once Apon a Time in China, Blue Encounter), Xun Zhou (The Message, The Banquet) and Jay Chou (The Green Hornet, Curse of the Golden Flower). True Legend is kinetic, fast moving and fun, with some incredibly imaginative choreography making the most of its set pieces.

Su Qi-Er retired from his life as a renowned Qing dynasty general in order to pursue his dream of a family and his own martial arts school. However, Su's peaceful life is shattered when his vengeful adopted brother, Yuan Lie, kidnaps his son and leaves Su for dead. Saved from death by his wife Ying and the reclusive doctor Yu, Su resolves to perfect his technique so that he may defeat Yuan Lie and reunite his family. Aided by the mystical "God of Wushu" and the eccentric "Old Sage," Su masters the art of Drunken Boxing, and embarks on the path that will eventually give rise to the legend of the 'King of Beggars'.

Yuen Woo Ping is Hong Kong's most famous and lauded action choreographer and is responsible for some of the most amazing martial arts sequences ever seen on screen. Previous to True Legend, Ping's last directorial feature length effort dates 14 years back, making True Legend a remarkable comeback and a must-see for any martial arts super fan!

HotDVDBD3D-BDUHD
The grave course of events set in motion by Thanos that wiped out half the universe and fractured the Avengers ranks compels the remaining Avengers to take one final stand in Marvel Studios', Avengers: Endgame, released on DVD, Blu-ray, 3D Blu-ray and 4K-UHD 2nd September ... END_OF_DOCUMENT_TOKEN_TO_BE_REPLACED
Top PicksView