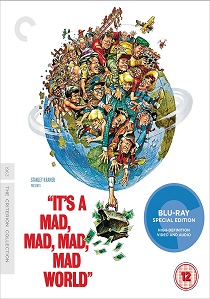 Stanley Kramer followed his Oscar-winning Judgment at Nuremberg with this sobering investigation of American greed.

Ah, who are we kidding? It's a Mad, Mad, Mad, Mad World, about a group of strangers fighting tooth and nail over buried treasure, is the most grandly harebrained movie ever made, a pileup of slapstick and borscht-belt-y one-liners performed by a nonpareil cast, including Milton Berle, Sid Caesar, Ethel Merman, Mickey Rooney, Spencer Tracy, Jonathan Winters, and a boatload of other playing-to-the-rafters comedy legends.

For sheer scale of silliness, Kramer's wildly uncharacteristic film is unlike any other, an exhilarating epic of tomfoolery.