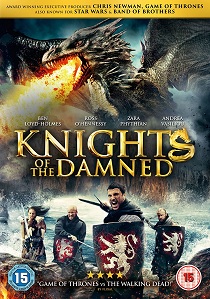 Prepare to be thrilled as knights lock horns with the undead in brand new epic fantasy adventure Knights of the Damned, released on DVD 25th September 2017 from High Fliers Films.

After relentless attacks on his castle the King enlists his finest knights to slay the dragon besieging the land. The elite army embark on their quest to defeat the fire breathing beast, but nothing can prepare them for the treacherous journey ahead.

Along their momentous crusade they encounter malicious water sirens, a race of warrior women hell bent on revenge and an unstoppable army of the damned.

Who will prevail in this epic battle against the forces of evil?

UHD
Disney and Pixar's original feature film Luca, released on DVD, Blu-ray and 4K UHD on 23rd August 2021, is a fun and heartwarming story about friendship, stepping out of your comfort zone and two ... END_OF_DOCUMENT_TOKEN_TO_BE_REPLACED
Top PicksView