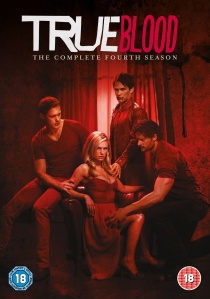 NewsTV SeriesHorror
News Article Go back to homepage
The sexy, spooky and wildly entertaining TV series returns with True Blood: The Complete Fourth Season released on DVD and Blu-ray on 21st May 2012, from HBO Home Entertainment. Bursting with even more charisma and allure, satisfy your addiction and get sucked in right from the very start as the Complete Season 1 - 4 box set is also released on both formats
Stephen Moyer, Jim Parrack, Nathan Parsons, Tara Buck, Kristin Bauer van Straten, Deborah Ann Woll
Amanda Overton, Khadija Brockington
HBO Home Entertainment
Unknown
21/05/2012
Thank you for supporting DVD365.net when you order using the link(s) below. As an Amazon Associate we earn from qualifying purchases
Buy DVD
Buy BD
Information

The sexy, spooky and wildly entertaining TV series returns with True Blood: The Complete Fourth Season released on DVD and Blu-ray on 21st May 2012, from HBO Home Entertainment. Bursting with even more charisma and allure, satisfy your addiction and get sucked in right from the very start as the Complete Season 1 - 4 box set is also released on both formats.

Mixing romance, suspense and mystery with a taste for humour, True Blood: The Fourth Season takes place in the not-too-distant future. Vampires have ventured out of the coffin thanks to the invention of a synthetic blood drink meaning they no longer need humans as a nutritional source - but is that enough to stop everyone?

In the latest spell-binding series, Sookie Stackhouse (Anna Paquin) finds herself entangled in a supernatural love triangle where she must decide between Bill (Stephen Moyer), the new Vampire King of Mississippi and Eric (Alexander Skarsgård), who is not the Viking he once was. However, are there bigger dilemmas on the horizon? When a charismatic Witch named Marnie (Fiona Shaw) threatens to overpower the Vampires once and for all, her Coven of white witches and mediums tempt Lafayette (Nelsan Ellis), Tara (Rutina Wesley) and Jesus (Kevin Alejandro) with other worldly powers.

As old alliances crumble and new relationships form, Season 4 of True Blood proves that nobody's safe when there's magic in the air.

True Blood is the addictive TV series from Emmy® and Oscar® winning creator Alan Ball (Six Feet Under), drawn from the meticulously crafted world of novelist Charlaine Harris. True Blood caused a sensation from the first episode of season one and the latest instalments only build on the colourful life of the supernatural eccentrics.