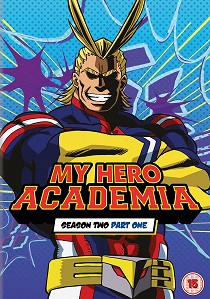 Fear not citizens, because My Hero Academia: Season Two, Part One is here! Enroll in a breathtaking new season of the action-packed anime hit when the new semester begins on 2nd April 2018, with the series available on DVD and Blu-ray courtesy of Sony Pictures Home Entertainment.

Featuring the first 12 episodes, dive deeper into FunimationNow's most simulcast show of 2017 and the world of heroes as our trainees face a trial more exciting and challenging than any exam - the U.A. High Sports Festival!

DVD
Doctor Strange teams up with a mysterious teenage girl from his dreams who can travel across multiverses in Doctor Strange in the Multiverse of Madness, released on DVD, Blu-ray and 4K UHD 18th July 2022 from ... END_OF_DOCUMENT_TOKEN_TO_BE_REPLACED
Top PicksView