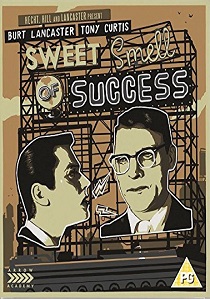 One of the darkest films ever to come out of the Hollywood mainstream both literally and figuratively this spell-bindingly cynical study of Machiavellian media machinations in a neon-drenched New York City was the first and best American film by Alexander Mackendrick, who already had several Ealing Studios classics on his CV (Whisky Galore, The Man in the White Suit, Mandy, The Ladykillers) when he crossed the Atlantic.

Considering his star status, Burt Lancaster was famously fearless when it came to risking audience sympathies, and he gives one of his most memorable performances as ruthless gossip columnist J.J. Hunsecker, who'll go to any lengths to break up his sister's unsuitable romance, even if it means destroying the reputation of press agent Sidney Falco (Tony Curtis).

Brilliantly scripted by Clifford Odets and Ernest Lehman from the latter's autobiographical short story, and filmed in gleaming monochrome by legendary cinematographer James Wong Howe, Sweet Smell of Success, released on Blu-ray by Arrow Academy on 30th March 2015, is one of the greatest and most clear-eyed of all American films, lifting up the stone of Fifties decorum and unflinchingly revealing what was crawling underneath.

UHD
Pixar Animation Studios serves up a breakthrough comedy with something for everyone as Ratatouille arrives for the first time on 4K Ultra HD 26th July 2021, exclusive to Zavvi. END_OF_DOCUMENT_TOKEN_TO_BE_REPLACED
Top PicksView