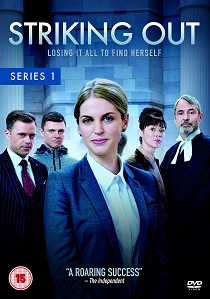 Starring the stand out talents of Amy Huberman and Neil Morrissey comes a gripping new legal drama Striking Out. Following its run on new channel 5 Select, Striking Out series one and two are set to arrive on DVD both separately and as Striking Out One and Two Box Set, thanks to Acorn Media International.

Tara Rafferty (Amy Huberman - Cold Feet) is a high-flying solicitor at a prestigious Dublin law firm, but when she discovers her fiancé and fellow solicitor Eric (Rory Keenan - War and Peace), has been cheating on her with a colleague, she decides to make some big life changes. Dumping her unfaithful partner, she quits her job and sets up on her own practice in a makeshift office, at the back of a café.

With the help of her friends and associates, including her streetwise ex-client turned assistant Ray (Emmet Byrne - Red Rock), private detective Meg Riley (Fiona O'Shaughnessy - Utopia), and friend and mentor Senior Counsel Vincent Pike (Neil Morrissey - Line of Duty), Tara becomes a force to be reckoned with. Soon she is taking on high profile cases, some of which pit Tara against her former colleagues and major legal establishment players. Can she ever truly escape her past and make it on her own?

Earning Amy Huberman the Best Actress accolade at the Irish Film and Television Awards 2017, Striking Out Series One is released on 12th March 2018 and Series Two and Striking Out Complete One and Two Box Set arrive on DVD on 23rd April 2018.

Get on the case with Striking Out.

HotUHD
Let an awesome journey unlike any other begin as Stanley Kubrick's dazzling 2001: A Space Odyssey is released on 4K UHD 22nd February 2021 from Warner Home Video. END_OF_DOCUMENT_TOKEN_TO_BE_REPLACED
Hot PicksView

A fatally ill man tries to secure the future of his family in a world where the toxicity of the sun forces people to stay inside during the daytime in LX 2048,released on DVD and Blu-ray 15th February 2021 from Dazzler Media.
Movie quote