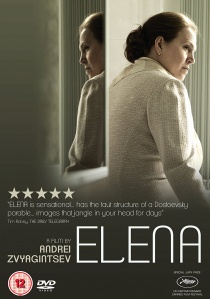 Winner of the Cannes Film Festival's Un Certain Regard Special Jury Prize, Elena, released on DVD and Blu-Ray by New Wave Films on 11th February 2013 is a modern twist on the classic noir.

Elena and Vladimir come from very different backgrounds. Vladimir is a wealthy, cold man, while Elena comes from a modest background, serving as his docile wife. The two of them have met late in life, each with a child from a previous marriage.

Vladimir has a distant relationship with his daughter. In contrast, Elena desperately tries to save her alcoholic son and his family from poverty with means she alone could not provide. When her husband Vladimir has a heart attack, he suddenly realizes his time on earth is limited. A tender but brief reunion with his daughter leads him to name her as the sole heir to his fortune. When Vladimir announces this change to Elena, her hope to help her son quickly vanishes. Submissive housewife Elena then comes up with a plan to provide her son and his family with a real change in life.