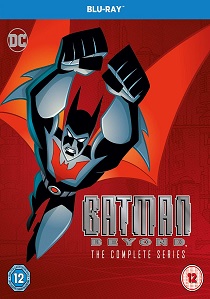 Batman Beyond: The Complete Series (1999)

Rage and revenge for his father's murder motivate Terry McGinnis to steal Bruce Wayne's high-tech Batsuit. And then a greater purpose and sense of justice keeps him wearing it.

Across three seasons and 52 episodes of this highly acclaimed Emmy-award winning series, he patrols the streets and skies of Gotham City with Bruce as his guide. Get in on the exciting and explosive partnership between an ex-crime-fighter and his apprentice in the animated series that catapulted the Batman legend to new justice-seeking heights, now in beautiful High Definition!

The 6 disc Batman Beyond: The Complete Series, released on Blu-ray 30th December 2019 from Warner Home Video, contains all 52 Episodes, with Over 18 Hours of Action-Packed Adventures!

DVD
In Disney's Mulan, released on DVD, Blu-ray and 4K UHD 10th November 2020, a fearless young woman risks everything out of love for her family and her country to become one of the greatest warriors ... END_OF_DOCUMENT_TOKEN_TO_BE_REPLACED
Hot PicksView